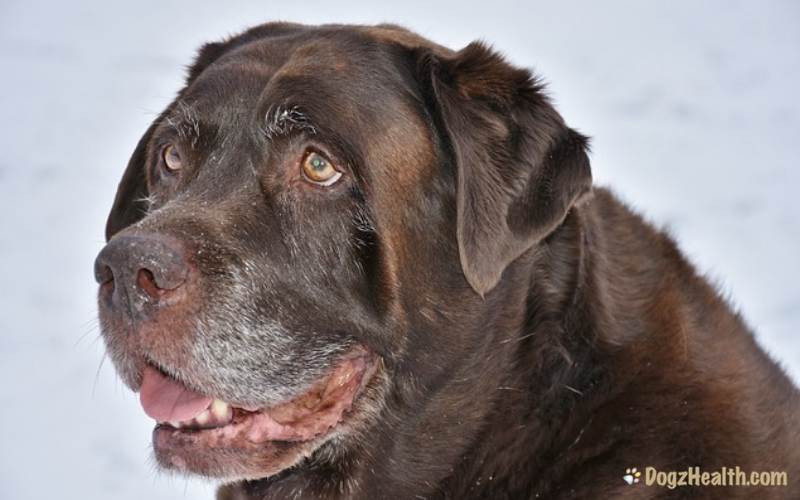 Canine dementia (Canine cognitive dysfunction) is similar to Alzheimer’s disease in people. It occurs in older dogs and is a progressive disease. This page looks at the possible causes, symptoms, and treatment of this disease.
Canine cognitive dysfunction (CCD), commonly known as canine dementia, or “old dog syndrome”, is a rather common progressive disease in aging dogs.

About 50% of dogs over 10 years of age show some signs of dementia. As they age, dogs with CCD show increasing signs of senile behavior.

Somewhat similar to Alzheimer’s disease in people, dog dementia is characterized by the dog’s brain undergoing a series of changes. As a result, a dog with dementia has diminished brain functions associated with thinking, recognition, memory, and learned behavior.

Aging dogs with cognitive dysfunction syndrome usually show some or all of the following signs and symptoms: 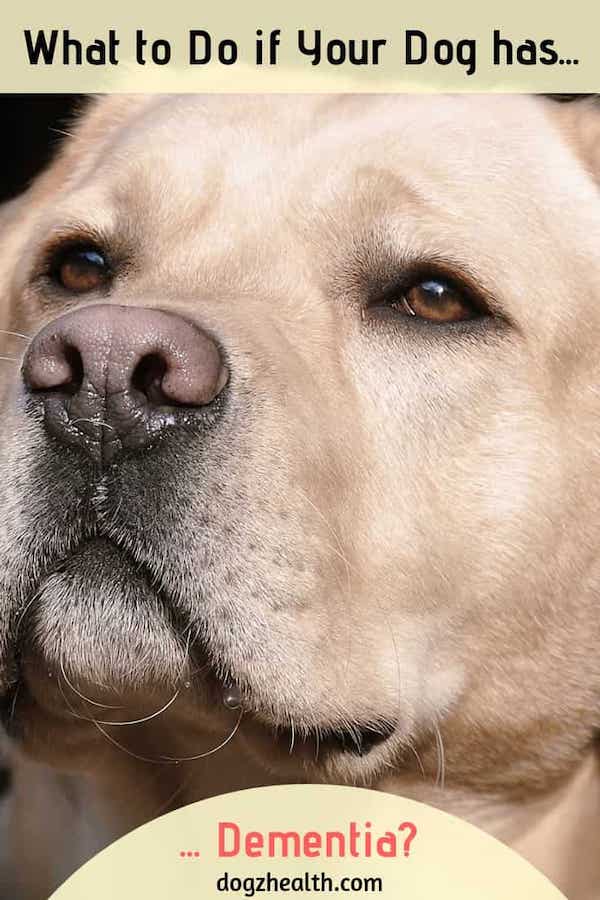 One of the hallmark symptoms of CCD is disorientation. The dog may seem lost even in familiar environments (e.g. in his own yard). Or he may not be able to get around furniture or corners. He may also have difficulty with doors, so for example, when trying to get out of a room, he may go to the closet door instead of the room door.

In addition, he may not be able to recognize familiar faces, sometimes not even family members, and may not respond to his own name.

Dogs with canine dementia usually sleep more, usually during the daytime, and less during night time. Instead of sleeping, they may wake up, wander around, or make noises, such as howling and whining.

Aging dogs with dementia may also show a change in their activity patterns. In particular, they tend to lose interest in even their favorite activities such as playing and walking. Instead, they tend to just pace and wander aimlessly.

Some dogs may even develop compulsive behaviors such as circling, head shaking, and tremors.

Dogs with cognitive dysfunction are prone to have “accidents” in the house even though they have been properly house trained. They may not be able to signal to their owners to let them know that they need to go outside to relieve themselves.

Dogs with dementia also show some behavioral changes. For example, some dogs may be more “clingy” to their owners, showing a need of human contact 24 hours a day.

On the other hand, other dogs may want less attention. They may walk away when being petted and may not even greet their family members.

Not all dogs showing some or all of the above symptoms have CDD.

Some other underlying medical condition (e.g. cancer, organ failure, or side effects of drugs, etc.) may also cause these signs.

If your aging dog shows any of the above signs, take him for a medical check-up to rule out any medical problems before treating him for canine dementia.

Research has found several possible reasons that involve changes in the brain of an aging dog that may cause CCD.

In dogs with canine dementia, a protein (B-amyloid) is deposited in the white and gray matter of the brain. The deposited protein forms plaques in the brain, causing some brain cells to die and the brain to shrink.

Also, research has found decreased oxygen levels in the brains of older dogs.

In addition, there appears to be changes in various neurotransmitter chemicals, including serotonin, norepinephrine, and dopamine.

Ultimately, one or more of the above changes in the brain may interfere with proper nerve transmission. The result? Behavioral changes in the aging dog.

Conventional treatment of dog dementia is the use of the drug Anipryl (selegiline) which is a MAOI medication (monoamine oxidase inhibitor medication).

It increases the dopamine in the brain and is a medication that is FDA approved for use in dogs to treat CCD (and Cushing’s disease).

The drug is effective in improving the quality of life for some older dogs. But the effects of this drug may not be seen for up to two months, so be patient.

In conjunction with conventional medication, it is also beneficial to give additional antioxidant supplements to older dogs.

Certain herbs (e.g. ginkgo, oat, the Ayurvedic herb Bacopa, etc.) have also been found to be helpful to support memory and learning. Here are some natural supplements that may help: