Canine ulcers are usually caused by corticosteroids or NSAIDs. A dog with a stomach ulcer vomits, sometimes even with an empty stomach. There may be blood in the vomitus. Read on and learn more about the symptoms, possible causes, and treatment of stomach ulcers in dogs.
Stomach ulcers do not just occur in people. Dogs also get stomach ulcers from time to time.

Stomach ulcers in dogs can be superficial or deep. Superficial ulcers are just small patches of inflamed and eroded stomach lining. Deep ulcers, on the other hand, are perforated areas involving all layers of the stomach wall.

A dog can have a single ulcer in his stomach, or there may be multiple ulcers. Sizes of ulcers can range from under one inch to several inches in diameter. 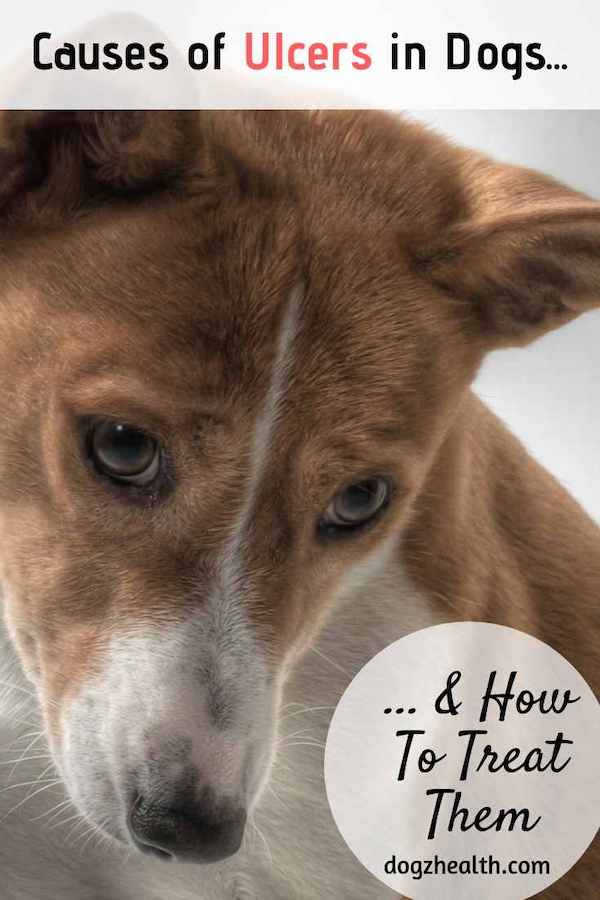 While most commonly stress causes stomach ulcers in people, in dogs, medications are the main culprits.

For some reason, dogs are more vulnerable to the ulcer-causing effects of these drugs than humans.

Use NSAIDs with Care

NSAIDs such as aspirin and ibuprofen inhibit a hormone-like substance that protects the stomach lining. Although many vets say that buffered aspirin is gentler and easier on the stomach, it can still cause canine ulcers. So remember to use these drugs on your dog with care!

Besides the above drugs, mast cell tumors of the skin can also cause stomach ulcers in dogs.

The tumors produce and release histamine which stimulates acid secretion in the stomach. In fact, about 80 percent of dogs with mast cell tumors also suffer from stomach ulcers.

The classic symptom of stomach ulcers in dogs is chronic vomiting.

A dog with ulcers may vomit even with an empty stomach. Sometimes the vomitus may contain blood. The blood may be old and looks like coffee grounds, or fresh with clots.

Other signs include appetite loss, weight loss, and anemia. The dog will also be lethargic and weak.

Deep perforated ulcers are life-threatening and require emergency surgery. To prevent ulcers from recurring, the vet will try to identify and treat the underlying cause of the ulcers.

For non life-threatening cases of dog stomach ulcers, conventional treatment is the use of a combination of the following medications:

Treatment may take up to at least three to four weeks.

All ulcer-causing medications (e.g. corticosteroids, NSAIDs) have to be discontinued.

It is also a good idea to feed a dog with stomach ulcers three to four times a day, instead one big meal per day.

If your dog has a small stomach ulcer, you may want to try using some home remedies to help manage the problem.

You may already have heard of the herb Slippery Elm. It’s an amazing herb that is good for various ailments (both for people and dogs!).

The herb slippery elm (Ulmus fulva) comes from the inner bark of the tree. It is soothing to the skin and mucous membranes, and the mucilage it produces coats and protects mucous membranes such as stomach lining.

You can get capsules of slippery elm

and use one capsule per 20 pounds of the dog’s weight. Open the capsule and mix the content with water until it forms a thick gruel. Add this gruel to your dog’s food twice a day, until the stomach symptoms resolve.

Some vets also suggest using raw honey or Manuka honey to help treat minor cases of stomach ulcers in dogs. Honey is antibacterial and can destroy the bacteria that may be causing the ulcers.

Manuka honey in particular has strong antibacterial properties. Be sure to get one that has a UMF (Unique Manuka Factor) of 15 or above. UMF is a grading system – the higher the number, the more potent it is.

Unrefined (virgin) coconut oil also has antibacterial properties. When taken internally, it can help heal stomach issues such as ulcers.

If you plan to try using coconut oil to help treat your dog’s ulcer, start with small amounts, such as ¼ teaspoon per day (for small dogs) and 1 teaspoon (for bigger dogs). Gradually increase the amount every few days to up to 1 teaspoon per 10 pounds of body weight per day. Giving too much coconut oil too soon may cause diarrhea.

Most cases of stomach ulcers in dogs are caused by medications such as corticosteroids and NSAIDs. Work with your vet to monitor your dog’s condition carefully if you give these drugs to your dog. Discontinue such medications if your dog develops symptoms of ulcers.

Minor cases of canine ulcers can be managed by using some home remedies. For more serious cases, medications are needed to prevent worsening of the condition.