Canine valley fever (Coccidioidomycosis) is a systemic fungal disease caused by the organism Coccidioides immitis. This page looks at the symptoms and treatment of valley fever in dogs.
Valley fever in dogs is the most life-threatening of all systemic fungal diseases in dogs. It is caused by the fungus Coccidioides immitis, and is found in dry desert areas of the Southwestern U.S. (such as Arizona, desert areas of California, Nevada, New Mexico, southwestern Texas and Utah), and northern Mexico.

During drought periods, the Cocci fungus lies dormant in the soil. When it rains, the fungus comes back to life as a mold and releases airborne spores.

Valley fever can affect many warm-blooded animals, including dogs and people, but dogs seem to be particularly susceptible to the fungus. Perhaps it’s because dogs, especially large breed dogs, like to roam, sniff, and dig!

The disease is not contagious. It cannot be transmitted between people and dogs, and dogs cannot transmit the disease to other dogs. 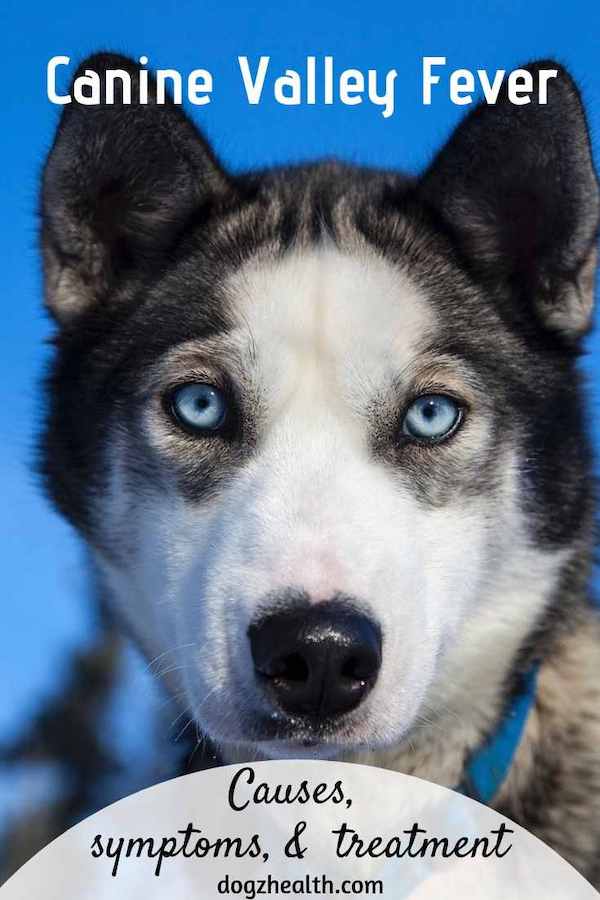 Most dogs develop an immunity against valley fever, and do not show any outward symptoms.

Valley fever in dogs usually affect older dogs or dogs with immune systems that are weak and compromised.

Infection occurs by inhaling the spores. If infection happens, the inhaled spores burst in the lungs and start growing.

The first symptoms of an infection are similar to those of a chronic respiratory disease, such as coughing and, in severe cases, acute pneumonia.

If the infected dog does not receive any treatment at this point, the fungus will spread throughout the body and the disease will become systemic (affecting the whole body). It will affect other organ tissues in the dog’s body, such as the long bones (most common), liver, spleen, lymph nodes, skin, and the brain.

It will cause symptoms such as:

Without any treatment, the symptoms will progressively worsen and it can be fatal. So valley fever, though not common, could possibly kill so if you live in one of the affected areas mentioned above, be aware of this canine disease!

Conventional treatment of valley fever in dogs is the use of one of the imidazole group of antifungal medications (such as ketoconazole, itraconazole).

Treatment usually starts with ketoconazole which is the least expensive.

However, as with many antifungal drugs, ketoconazole comes with some side-effects. It can sometimes cause vomiting, appetite loss, and even liver damage.

Itraconazole has fewer side effects but is more expensive than ketoconazole.

Both ketoconazole and itraconazole are oral medications. An infected dog has to continue to take either drug daily for 6 to 12 months to prevent recurrence.

In dogs with severe infections, vets will use intravenous Amphotericin B combined with one of the above oral medications. However, Amphotericin B can cause damage to the kidneys.

As you can see, medications for canine valley fever are expensive, and treatment time is long and not without side effects. Therefore, it is better to take preventive measures so that your dog does not become infected.

Here are some of the things that you can do: