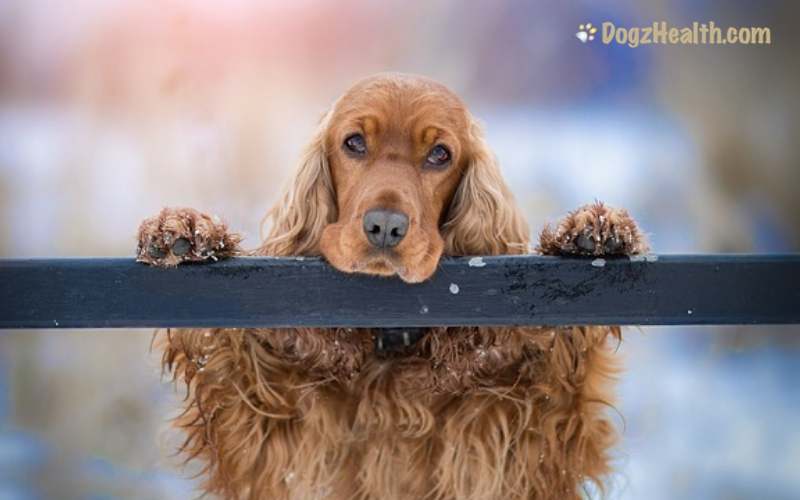 Common cocker spaniel health problems include ear infections, deafness, eye problems, and some autoimmune diseases. Let’s take a look at each.
If you are thinking of getting a Cocker Spaniel, you need to know about the common health problems that may affect this dog breed.

Of course, not all Cocker Spaniels will develop the common health problems as described below, but keep in mind that they are more predisposed to these illnesses.

Because Cocker Spaniels have long ears, they are prone to develop ear problems, such as:

Ear infections are common in Cocker Spaniels because of their long, floppy ears.

A typical sign of ear infection in dogs is a foul-smelling, waxy or pus-like discharge from the ear. The ear will be painful. As a result, the dog will scratch the affected ear incessantly and rub it against furniture or on the floor.

There will also be a lot of violent head-shaking, and the dog will tilt his head to the painful side. It will most likely cry out if you touch his ear.

Congenital deafness sometimes occurs in American Cocker Spaniels and can affect one or both ears.

A puppy can respond to sound around 11 days after birth. If your Cocker Spaniel puppy fails to be woken up by a loud noise, he is likely to have bilateral deafness.

There is no treatment for deafness. Luckily, most dogs cope very well with a hearing disability. You can use hand signals and can also train the dog to respond to signals using lights.

Dry eye (keratoconjunctivitis sicca) is a disorder of the tear glands in which there is not enough tear production.

As a result, the affected eye becomes irritated, and the conjunctival tissues becomes red. A thick, stringy, mucoid discharge covers the eye. The cornea eventually will become dry and brown. Blindness can result.

Due to this weakness, the gland comes out of its normal position and is exposed to the air. This allows the gland to come into contact with airborne irritants, which can cause infection to the gland. As a result, the gland often becomes irritated, red, and swollen.

The preferred treatment of this eye condition is to surgically reposition the gland.

Primary glaucoma is a congenital eye disease that commonly affects Cocker Spaniels. Glaucoma is a serious eye problem that can lead to blindness if untreated in a timely manner. Be sure to visit this page to learn more about this eye problem.

Entropion is a condition where the bottom eyelid rolls inward. This causes the eye lashes to rub against the cornea, resulting in pain, tearing, and inflammation. It can occur in both eyes.

Ectropion is an eyelid that rolls outward. As a result, tears are not channeled into the tear ducts but drain on the face.

Eyelid surgeries can fix both of these conditions.

Distichiasis is another rather common congenital eye condition in Cocker Spaniels.

In this condition, an extra row of eyelashes grows from the eyelid and is directed inward, placing the eyelashes in direct contact with sensitive eyeball tissue.

Without treatment, the eyelashes rub continuously on the eyeball. This causes constant irritation and eventual corneal abrasion. This may result in scarring and vision loss.

A dog with this condition squints constantly and rubs the affected eye against furniture or with his paws. The eye may look irritated, red and/or swollen.

Treatment involves removing the eyelashes that are causing the problem.

This can be done by either cryotherapy (chemical freezing), surgery, or electrolysis. Electrolysis involves placing a tiny needle inside the hair follicle and then killing it with a pulse of electricity.

Certain skin problems affect Cocker Spaniels quite often. They include:

Primary seborrhea is an inherited skin disorder. Cocker Spaniels are predisposed to this skin problem.

Dogs with primary seborrhea may have dry flaky skin, or oily greasy scaly skin, or a combination of both. They are also smelly with a rancid doggy odor.

Dogs with seborrhea are also prone to chronic ear infections.

Dogs with food allergies show signs of intense itching, sometimes with other skin problems such as skin rashes and hair loss.

Characteristically, the rashes appear on the ears, feet, backs of the legs, and the underbelly. Dogs with food allergies also tend to have recurrent ear infections.

Some autoimmune diseases that affect Cocker Spaniels are:

Autoimmune hemolytic anemia is an autoimmune disease in which the body destroys its own red blood cells.

Symptoms of AIHA are usually non-specific, such as poor appetite, listlessness, and lethargy. The dog may have a rapid heartbeat and rapid breathing.

If you examine his gums, you may notice that they are pale, or they may be yellowish due to jaundice as a result of the breakdown of red blood cells.

Reduced red blood cell counts means reduced oxygen in the organ tissues. Most dogs that die with this condition do so in the first few days due to kidney, liver, or heart failure, or because of a bleeding problem.

Hypothyroidism is a condition in which the body produces insufficient amounts of thyroid hormone. As mentioned above, hypothyroidism can be the result of an autoimmune disorder (autoimmune thyroiditis). But sometimes it can be caused by other factors, such as poor diet, certain medications, or toxins.

Other health problems that may affect Cocker Spaniels quite often include:

Luxating patella is a congenital disease in which the alignment of the bones and joints of the hind leg is abnormal, resulting in a displacement of the patella to the side of the joint.

Dilated cardiomyopathy (enlarged heart) is a common cause of canine congestive heart failure.

Cocker Spaniels are predisposed to this heart problem. The age of onset is 2 to 5 years. Dogs with this problem usually tire easily. They are lethargic and may be unwilling to exercise.

In more severe cases, they may cough, have difficulty breathing, bluish gums, and fainting spells. Treatment is to use medication to improve the force of the heart muscle, to control arrhythmias, and to prevent fluid buildup in the abdomen and lungs.

Supplements such as vitamin-B, Coenzyme Q-10, taurine and carnitine are also recommended.

Cocker Spaniels are predisposed to certain types of cancer, such as lymphosarcoma, which is cancer arising from the lymphocytes in the lymphatic system, and malignant melanoma, which is a form of skin tumor that arises from melanocytes, the cells in the skin that produce dark pigment. 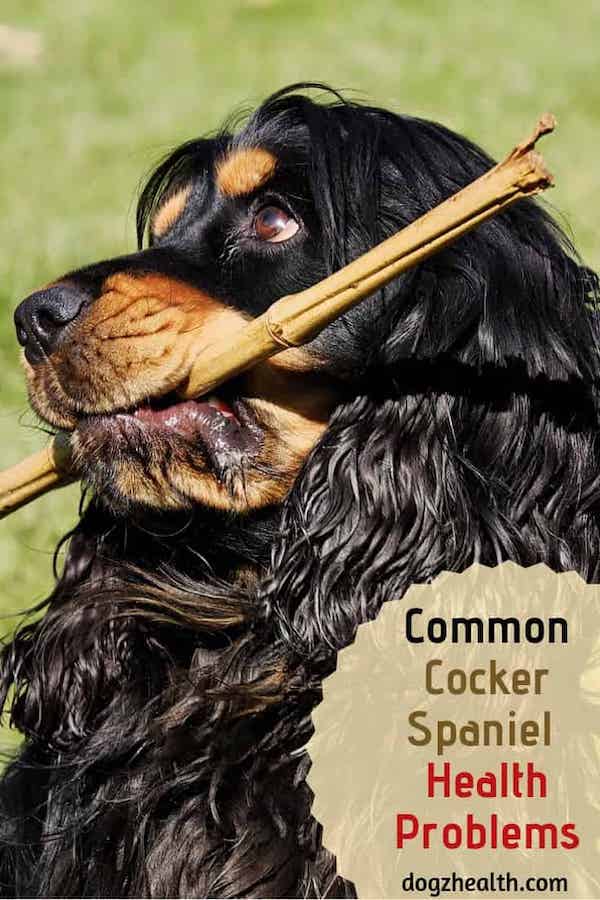