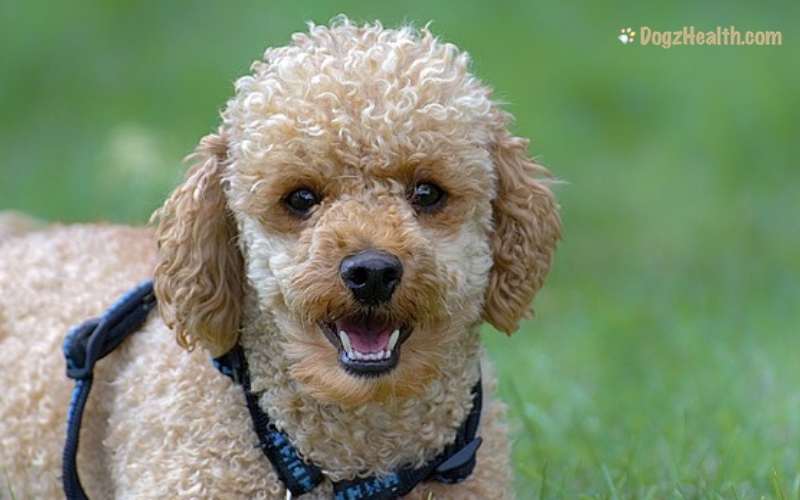 Although some allergic dogs do sometimes show symptoms such as sneezing, wheezing, and runny eyes and nose, these symptoms are not typical.

There are different types of dog allergies, and depending on the type, an allergic dog may show different symptoms.

But the most typical symptom is intense itching.

As a result of the intense itching, the dog constantly scratches, licks, chews, and bites his skin, which can lead to skin inflammation and bacterial infections.

You may find raised infected welts or open sores on your allergic dog’s skin, and sometimes there is hair loss. Ear infections are also common in dogs with allergies.

Dogs suffering from allergies may have allergy symptoms their entire lives. It is also typical that the symptoms get worse as the dogs grow older.

As dog parents, we should learn more about the various common allergies and allergy symptoms in dogs, so that the allergic dog can get prompt and proper treatment. 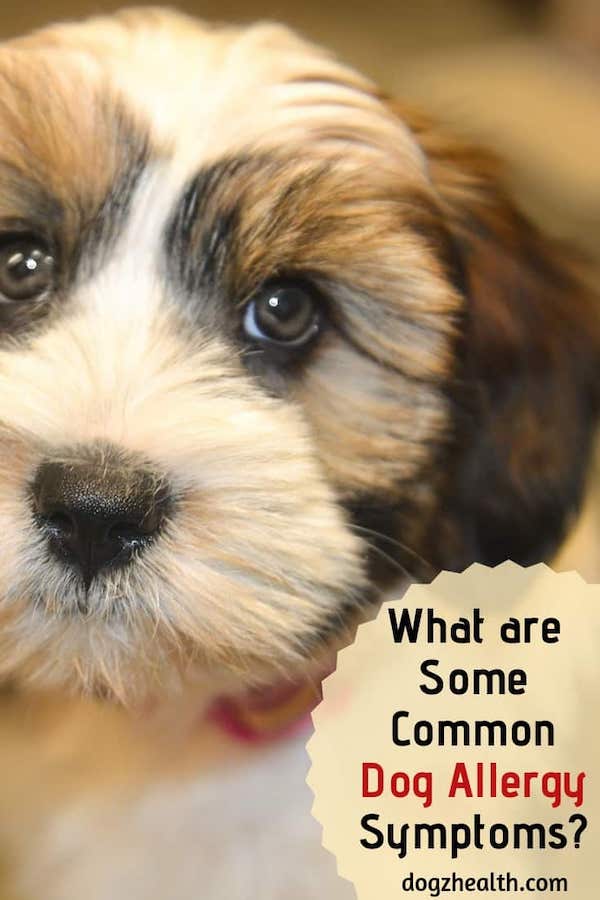 Canine atopy is caused by an allergic reaction to allergens in the environment that are either inhaled or absorbed through the skin. It is the most common form of canine allergy.

Canine atopy can cause dog allergy symptoms to show in different parts of a dog’s body. Most commonly, the following body parts are affected:

The ears will be inflamed or infected. They will appear red with waxy discharge and will give out a bad odor.

The dog will constantly scratch the ears, shake his head, and rub the ears against furniture in order to alleviate the itching.

The muzzle, areas around the eyes, and the chin may appear red and suffer from hair loss. The allergic dog will constantly scratch and rub the face either with his paws or against some furniture such as the leg of a chair or the side of a bed.

The feet will become red and inflamed. They may give out a bad odor if the skin is infected. There may be brown discoloration due to constant licking. The dog will lick and chew at the feet incessantly.

The skin will generally be red, crusty or scaly. It may give out a bad odor if infected. Constant licking on a particular spot may result in discoloration, or hair loss. The dog will frequently lick and scratch the belly, the sides, and the groin area.

Note that atopy itself does not cause hair loss, skin infections, and discoloration. These are the results of constant scratching caused by the primary symptom (itching).

Other symptoms of canine atopy include sneezing, wheezing, runny eyes and a runny nose (allergic rhinitis).

Food allergies are caused by an allergic reaction to one or more ingredients in the dog’s food. Food allergies are most common in dogs over 2 years of age, but sometimes can be found in younger puppies as well.

The main symptom of canine food allergies is intense itching, sometimes you can also see other skin problems such as skin rashes and hair loss.

Characteristically, the rashes appear on the ears, feet, backs of the legs, and the underbelly. Many dogs will start by developing a red, moist rash in their ears.

Occasionally, dogs with food allergies may have stomach problems, such as gas, increased bowel movements, soft stool, or diarrhea.

Do not confuse food allergies with food intolerances, which are not true allergies.

Food intolerances do not cause allergic reactions such as itching and skin problems. They generally cause diarrhea and vomiting. It’s the same kind of reaction as when we have eaten something not quite agreeable with us, such as spicy or greasy foods.

Food allergies can be confused with canine atopy because the classic symptom of both allergies is the same (intense itching).

Also, unlike atopy, the allergic symptoms brought on by food allergies (e.g. itchy skin) do not respond to conventional medication such as antihistamines and corticosteroids.

Dog flea allergies is caused by an allergic reaction to one or more substances in the saliva of fleas.

That’s why a dog suffering from flea allergy dermatitis may or may not have fleas on his body.

Fleas are usually found at the base of the tail, along the lower back, the inside of the thighs, stomach, and the groin area. They usually bite those areas, causing intense itching to the dog. As a result, the dog will chew, bite, scratch, and lick such areas constantly.

The dog may also scoot on the floor.

Very often, the incessant biting and scratching will result in skin lesions which are usually small red bumps (papules) that may be crusted.

Hair will also fall out and the skin will become dry and scaly.

Symptoms of dog flea allergies are usually worse in the summer when fleas are more abundant.

Contact dermatitis is caused by the direct effect of a chemical or irritant on the skin, such as flea collars, carpet cleaner, weed killer, fertilizers, insecticides, and so on.

In dogs, usually the allergy symptoms occur in areas where the skin is not well protected by hair, such as the feet, nose, chin, the underbelly, etc.

Occasionally, some dogs will exhibit more severe allergic reactions to some allergens.

One form of more severe allergy symptom is hives. Red itchy bumps suddenly appear on the skin of the dog’s face and other parts of the body. The hair sticks out in little patches, and the eyelids will usually swell.

Hives are usually caused by insect bites, or some topical insecticides or soaps.

Anaphylaxis rarely occurs but when it does, it can be life-threatening. It is an acute allergic reaction to something swallowed or injected.

The most common allergens are penicillin, and the venom of bees and wasps.

If left untreated at this point, the allergic response will start to involve the whole body. Signs include:

If a dog showing the above signs is not being treated immediately, he will go into shock, with respiratory and cardiac failure, and eventually will die.

The most typical canine allergy symptom is intense itching. This causes the dog to lick, chew and scratch his body, causing skin irritations and infections.

Food allergies in dogs are actually rather rare. Food allergy symptoms are non-seasonal and do not respond to medications.

For information on conventional and alternative natural treatments, please visit the related pages below.