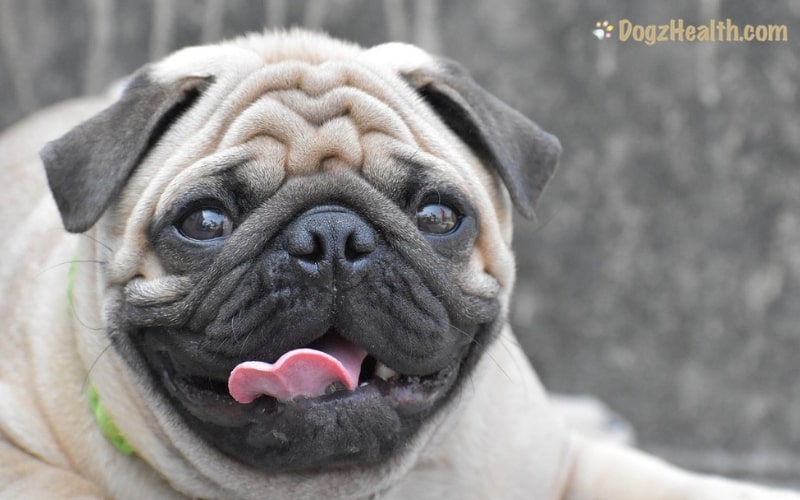 Most cases of dog gagging are caused by foreign objects in the mouth, throat, or esophagus. But it can also be caused by some health problems such as kennel cough. This page looks at the possible causes of gagging in dogs.
All dogs gag occasionally. If the gagging stops rather quickly and does not recur, we do not have to worry too much.

Sometimes, a dog gags when the collar is too tight around the neck.

Older dogs tend to gag more because, just like people, when they get older, they tend to produce more mucus and their throats are more sensitive.

But, if your dog is gagging non-stop, or on-and-off repeatedly, then you need to take action to figure out the cause of the gagging.

More often than not, the dog has probably got something caught in his throat or esophagus, but note that there are some other health problems that can cause dog gagging as well.

Below is a list of some possible causes of dog gagging. 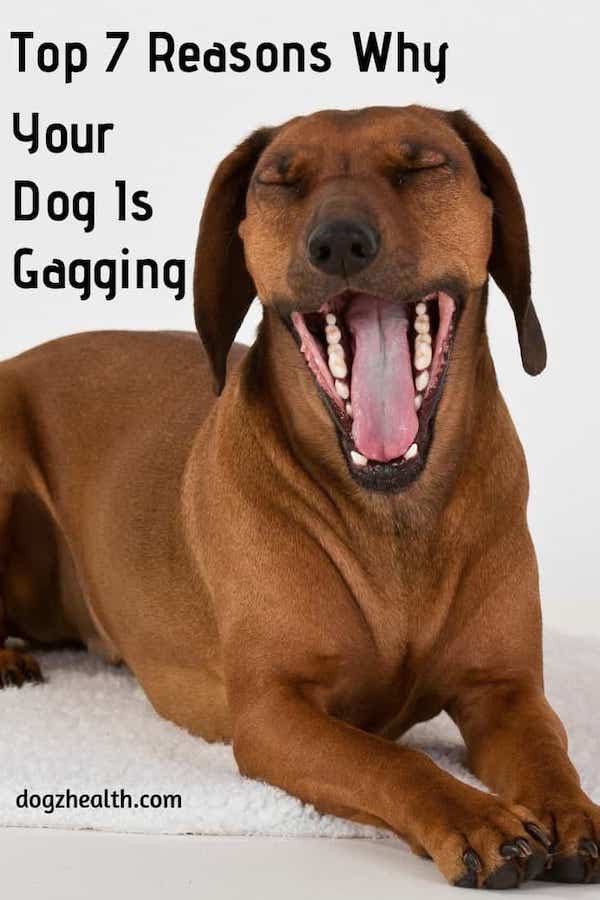 Foreign Objects in the Throat

Dogs gag on small objects such as small rubber balls that can lodge in the back of the throat.  Sometimes, bones can lodge sideways in the throat and that can cause gagging in dogs as well.

Suspect a foreign object caught in the throat if your dog is gagging, pawing at the mouth, drooling, retching and attempting to vomit. The dog will naturally act and look very anxious.

Foreign Objects in the Esophagus

The esophagus is the tube that connects the throat to the stomach. It is responsible for propelling food and water into the stomach by a series of rhythmic contractions.

It is also rather common for foreign objects (such as bones, bone splinters, small toys, string, fish hooks, etc.) to be caught in the esophagus.

Signs of a foreign object caught in the esophagus include gagging, retching, drooling, and regurgitating.

If your dog has been gagging and regurgitating for a few days and is having difficulty swallowing, it is possible that there is a partial obstruction of the esophagus.

More seriously, if a sharp object gets stuck in the esophagus and has punctured it, the dog will develop a fever. He will also cough and will have difficulty swallowing. His breathing will be rapid.

Partial obstruction or perforation of the esophagus are serious matters and if you suspect your dog has this problem, don’t wait – take the dog to the vet without delay.

Foreign Objects in the Mouth

Foreign objects (such as bone splinters, plant awns, fish hooks, etc.) can also be caught in the mouth, between the teeth, stuck in the lips, gums. Sometimes, small objects can get stuck in or beneath the tongue, or wedged across the roof of the mouth.

The signs of a foreign body in the mouth include pawing constantly at the mouth, drooling, and gagging. The dog will rub the mouth on furniture or along the floor, or lick the lips repeatedly.

If the object has been in the mouth for over a day, the dog will show signs of lethargy, refusal to eat, and bad breath.

NOTE: If your dog suddenly starts gagging, the first thing to do is to look into his mouth and down his throat to see if there is a foreign object stuck somewhere. Get immediate veterinary assistance if you see something but are unable to get it removed.

Other Possible Causes of Dog Gagging

Other possible causes include:

If a dog is suffering from kennel cough, he will have a dry, hacking cough, which is often accompanied by gagging and retching. It usually goes like “cough, cough, cough – ack”.

Please refer to our page on kennel cough for more information on the symptoms and treatment of this disease.

Rhinitis (nasal infection) and sinusitis (sinus infection) can cause dog gagging or retching (from a postnasal drip), sneezing, and nasal discharge. Usually, the discharge is thick, creamy, and foul smelling.

Common causes of acute rhinitis include parainfluenza, adenovirus, or herpesvirus. Secondary bacterial rhinitis can be caused by distemper.

In older dogs, infected teeth and tumors are the most common causes of rhinitis and sinusitis.

Puppies with roundworm infestation gag and cough when the larvae of the worm get to the lungs. From the lungs, they break through the capillaries and get into the air sacs.

Other symptoms of roundworm infestation include intermittent vomiting and diarrhea. Sometimes you may find worms in the dog’s stools or vomitus. (It’s gross, I know!)

Puppies with roundworms are anemic and stunted in growth, have a pot-belly, and a dull coat.

Some breeds of dogs (e.g. pugs) have this anatomical problem in which the soft palate is elongated, partially obstructing the airway during breathing.

This results in gagging, snorting, snoring, and gurgling, especially during and after exercise.

When to See a Vet?

If your dog is gagging and is exhibiting some of the following signs and symptoms, take him to the vet immediately:

If your dog’s collar is making him gag easily, consider using a harness instead.

Actually, some vets now claim that a tight collar or if a dog wearing a collar pulls on the leash often, the dog may develop hypothyroidism.

This is because the collar is pressing too hard against the thyroid glands and may cause damage to the glands.

So, many vets now recommend using a harness instead of a collar to protect the dog’s throat and thyroid glands.

If your dog suddenly gags, first check his mouth and throat to see if there is anything lodged inside. If there is but you can’t get it out, get your dog to the vet.

Can’t find anything inside the dog’s mouth?

Then check for other illness symptoms to see if you can determine what health problem, if any, your dog is probably suffering from.

In any event, if your dog has been gagging on and off for a couple of days, do get him to the vet to check out the underlying cause and receive proper treatment.

Bacterial infections or worm infestation can wreak havoc to a dog’s health, so don’t delay!