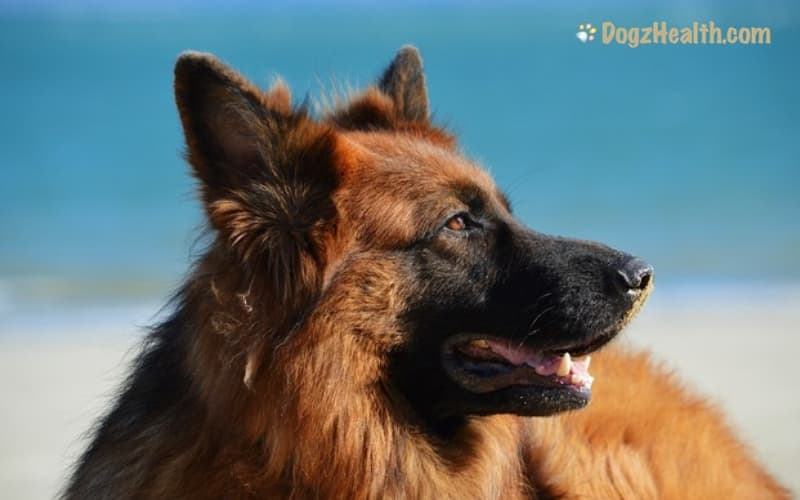 This page looks at common German Shepherd health problems, such as joint problems (elbow dysplasia, hip dysplasia, pano), bloat, epilepsy, and other congenital diseases.
German Shepherds are also known as Alsatian. They were originally used to help farmers to herd their sheep or cattle.

Because of their build and trainability, they are usually used as guide dogs and working dogs in the police force and the military. But German Shepherds are excellent companion dogs as well.

If you are thinking of getting a German Shepherd, you need to know about the common health problems that may affect this dog breed.

Of course, not all German Shepherds will be affected by the common health problems as described below, but keep in mind that they are more predisposed to these illnesses. 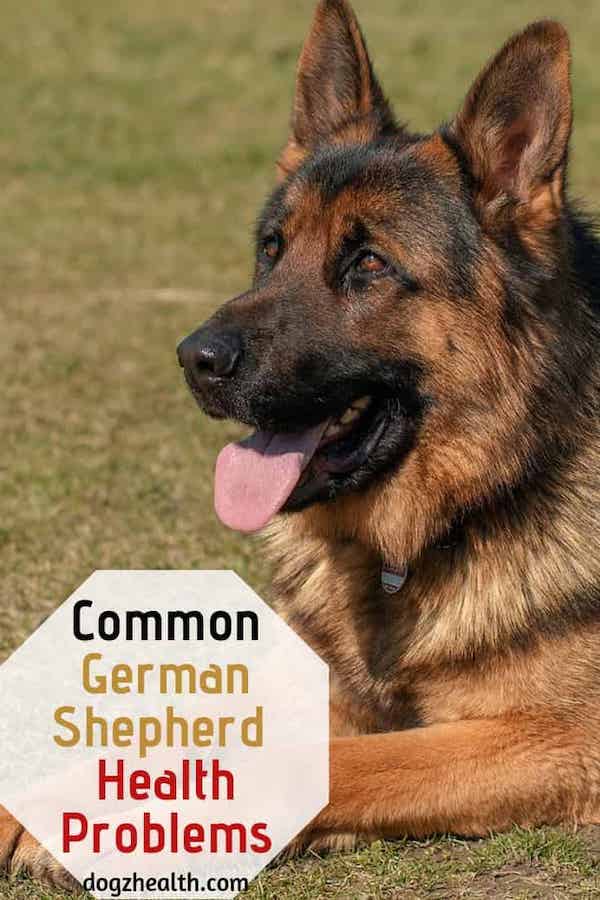 German Shepherds are predisposed to a number of joint problems, including:

Hip dysplasia is a genetic disease characterized by an abnormal development of the hip joint. It affects mostly large breed dogs such as the German Shepherds.

Specifically, there is malformation of the elbow joints. Because of the malformation, the bone or cartilage can be damaged, and this starts the process of osteoarthritis.

Large breed dogs such as the German Shepherds are predisposed to this disease.

Dogs with elbow dysplasia usually have varying degrees of lameness in the front limbs. Lameness may start as early as 4 months of age. Surgery is the treatment of choice.

Panosteitis (aka “Wandering Lameness” or “Pano”) is a disease of large, rapidly growing puppies between 5 and 12 months of age. One symptom of Pano is intermittent lameness in one or more legs. The pain and lameness tend to shift from one limb to another over the course of several weeks or months (hence the name “Wandering Lameness”).

The disease is self-limiting and symptoms usually disappear by the time the dog is 20 months old.

Problems Related to The Circulatory System

Two rather common German Shepherd health problems that are related to the circulatory system are:

Dilated cardiomyopathy (enlarged heart) is the most common cause of canine congestive heart failure in large and giant breed dogs such as German Shepherds. The age of onset is 2 to 5 years.

Dogs with this problem usually tire easily. They are lethargic and may be unwilling to exercise.

In more severe cases, they may cough, have difficulty breathing, bluish gums, and fainting spells.

Treatment is to use medication to:

Supplements such as vitamin-B, Coenzyme Q-10, taurine and carnitine are also beneficial.

Von Willebrand’s disease is the most common inherited bleeding disorder and affects quite a few dog breeds, including the German Shepherds. A deficiency of a plasma protein called the von Willebrand factor causes the bleeding.

The bleeding in most cases of vWD is mild and lessens with age. But, in severe cases, bleeding may include prolonged nosebleeds, bleeding beneath the skin, and blood in urine and stool.

German Shepherds are prone to the following health problems that involve the nervous system:

Degenerative myelopathy is an autoimmune disease in which the immune system of an affected dog begins to attack its own nerve cells.

It is a slow, progressive, degenerative spinal cord disorder that results in muscle weakness and a loss of coordination in the hind limbs. The age of onset is 5 to 14 years.

Treatment includes the use of medication (although only about 50% of affected dogs can see improvement with medicines), supplements, appropriate exercise and mechanical support.

Epilepsy is a disorder of recurring seizures. This condition can be idiopathic (unknown cause), which is believed to be inherited, or acquired.

German Shepherds are prone to idiopathic epilesy. Seizures (usually of the grand mal type) begin between 6 months and 5 years of age.

Treatment usually involves the use of drugs (e.g. phenobarbital) to control the frequency and severity of the seizures.

Bloating is a condition that refers to distention of the stomach due to rapid gas fill-up. Sometimes the bloated stomach rotates and becomes twisted. As a result of the twisting, blood cannot enter the stomach.

Deep-chested, large breed dogs, such as the German Shepherds, are prone to bloat.

Some of the classic symptoms of dog bloat include unproductive attempts to vomit, retching, and enlargement of the stomach. The dog may drool excessively and may appear restless.

Sometimes, the dog may just have gas and simply look uncomfortable, and the stomach may feel a bit tight (but not distended).

If your dog does not show the classic symptoms of bloat but has a tight stomach and cannot vomit or belch, observe your dog closely to see if an emergency trip to the veterinary clinic is necessary.

Deep-chested, large breed dogs, such as the German Shepherds, are prone to bloat.

Fistulas are chronic lesions in the perianal skin. The cause of these lesions is infection of the skin glands in and around the anus. Initially fistulas look like draining puncture holes.

As the problem progresses, they become open sores and draining tracts. The discharge is foul-smelling.

This problem affects German Shepherd dogs most often probably because of their low-slung, broad-based tail.

Surgery is the most effective treatment of perianal fistulas, although it may leave the dog with a degree of fecal incontinence.

Other treatment options include the use of immune-mediating medications, laser treatments and cryotherapy.

German Shepherds are predisposed to certain types of cancer, such as hemangiosarcoma, which is a soft tissue tumor that arises out of blood vessels, and osteosarcoma, which is the most common form of bone cancer in dogs.