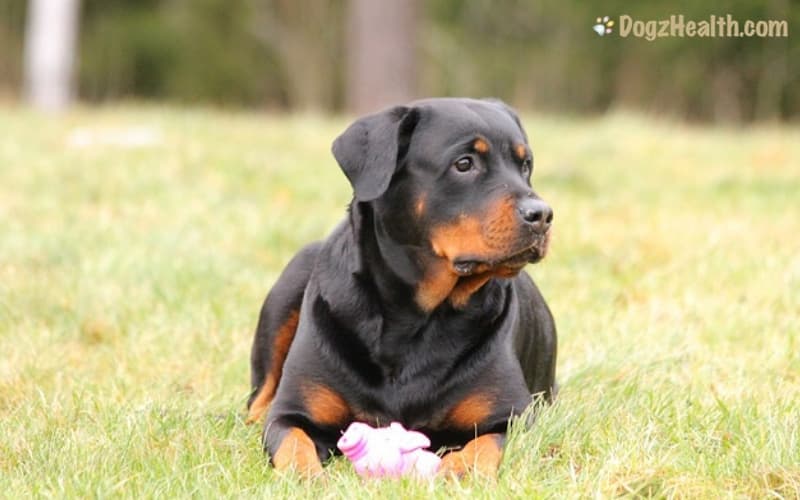 This post looks at common rottweiler health problems, such as joint problems (elbow dysplasia, hip dysplasia), eye problems, and other congenital diseases.
Rottweilers are intelligent, alert, and fearless. They are full of energy and are fast learners.

Rottweilers are very loyal to their owners, and can be aggressive towards strangers. It is important to give your Rottie proper training and socializing when s/he is a puppy.

If you are thinking of getting a Rottweiler, you need to know about the common health problems that may affect this dog breed.

Of course, not all Rottweilers will be affected by the common health problems as described below, but keep in mind that they are more predisposed to these illnesses. 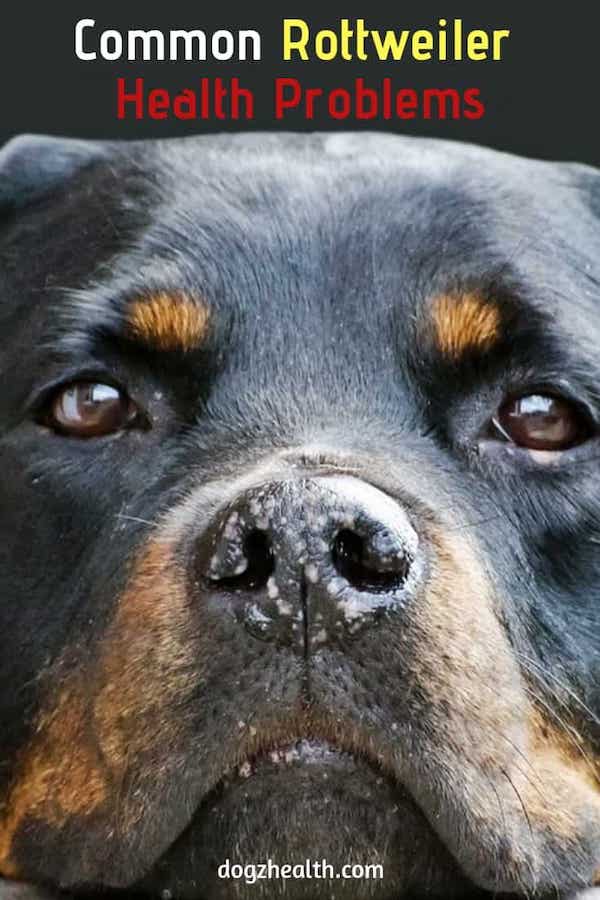 Rottweilers are predisposed to certain eye problems. Below are some Rottweiler health problems related to the eyes:

In addition, Rottweilers are predisposed to adult cataracts which usually occur in older dogs.

Surgery may be possible but expensive.

PRA is a group of eye diseases in which there is destruction of retinal cells in both eyes, leading to blindness. The initial sign of PRA is night blindness. The dog may not want to go out at night.

As the disease progresses, the dog will develop other signs of impairment, such as unwillingness to go down a flight of stairs.

Rottweilers suffering from PRA usually develop night blindness between 2 and 5 years of age and progress to total blindness within a year or so.

There is no treatment for PRA. Fortunately, with their acute senses of smell and hearing, dogs who have lost their vision can compensate very well, particularly in familiar surroundings.

Rottweilers are susceptible to a number of joint problems, including:

Hip dysplasia is a genetic disease. It refers to an abnormal development of the hip joint. It affects mostly large breed dogs such as the Rottweilers.

Specifically, there is malformation of the elbow joints. Because of the malformation, the bone or cartilage can become damaged. This in turn leads to the beginning of degenerative joint issues, such as osteoarthritis.

Large breed dogs such as the Rottweilers are prone to this disease. Dogs with elbow dysplasia usually have varying degrees of limping in the front limbs. Lameness may start as early as 4 months of age. Surgery is the treatment of choice.

Panosteitis (aka “Wandering Lameness” or “Pano”) is a disease of large, rapidly growing puppies between 5 and 12 months of age. Dogs with pano have intermittent lameness in one or more legs.

The pain and lameness tend to shift from one limb to another over the course of several weeks or months (hence the name “Wandering Lameness”). The disease is self-limiting and symptoms usually disappear by the time the dog is 20 months old.

Two rather common Rottweiler health problems that are related to the circulatory system include:

Aortic stenosis is a congenital heart disease, characterized by the narrowing of the aorta as it leaves the left ventricle.

The narrowing is caused by scar-like tissue just underneath the aortic valve, and the narrowing makes it more difficult for the heart to pump blood forward to the body.

Over time, this can cause problems to the heart and the condition can be fatal.

In serious cases, a dog may suddenly faint while exercising because there is not enough blood supply to the brain.

Von Willebrand’s disease is the most common inherited bleeding disorder and affects quite a few dog breeds, including the Rottweilers.

The bleeding is caused by a deficiency of a plasma protein called the von Willebrand factor. The bleeding in most cases of vWD is mild and lessens with age.

But in severe cases, bleeding may include prolonged nosebleeds, bleeding beneath the skin, and blood in urine and stool.

Bloating is a condition that refers to distention of the stomach due to rapid gas fill-up. Sometimes the bloated stomach rotates and becomes twisted.

As a result of the twisting, blood cannot enter the stomach. Deep-chested, large breed dogs, such as the Rottweilers, are susceptible to bloat.

Rottweilers are predisposed to certain types of cancer, such as: